Point Given was the first Thoroughbred in history to win four consecutive million-dollar races.

Massive, powerful, consistent, determined, and sometimes hard to handle, Point Given showed early on that he had speed and stamina: two essential elements for a horse vying for the Triple Crown. “Point Given is a cross between an eating machine and a locomotive.”
Bob Baffert, Trainer of Point Given

As a two-year-old, Point Given gave notice that he was a force to be reckoned with, winning the Hollywood Futurity and Kentucky Cup Juvenile Stakes.

He ended an already impressive two-year-old season with an electrifying second in the 2000 Breeder’s Cup Juvenile Stakes. Even though he came up a nostril short, his stretch run gave viewers a hint of what the powerful chestnut would accomplish.

“It was like I had a loaded cannon and
all I had to do was pull the trigger when it was time.”
Gary Stevens, jockey, after Santa Anita Derby victory, 2001

The Big Red Train began his three-year-old season as expected, with easy victories in Derby prep races, making him the horse to watch in the upcoming Triple Crown races.

Point Given entered the Churchill Downs starting gate as the 9-5 favorite. He tracked the leaders while chasing a blistering pace, but weakened in the Derby stretch, finishing a disappointing fifth.

His fifth-place finish in the 2001 Derby was the only off-the-board finish in his entire career.

The “real” Point Given showed up in the Preakness Stakes, where he took command early to win easily. 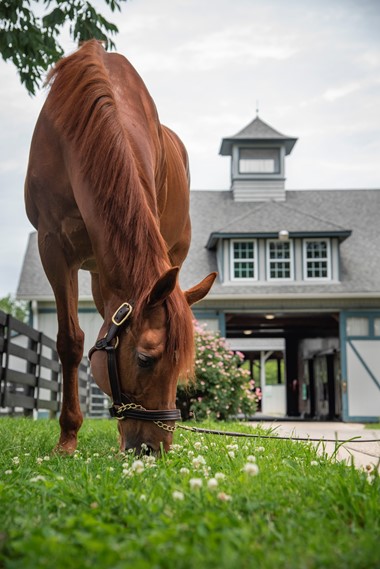 “This is a very, very special horse.”
Gary Stevens, Jockey

He concluded the year with wins in the Grade 1 Haskell Invitational and Travers Stakes.

Shortly after his Travers Stakes victory, a tendon strain was detected in Point Given’s right foreleg, forcing his retirement and cutting short a brilliant racing career.

“It hurts any time a good horse is retired prematurely. It’s just that this one hurt more than most.”   Bill Finley, ESPN

Point Given was voted Horse of the Year and Champion three year old in 2001. He was syndicated at stud for $50 million and stood at Three Chimneys Farm before moving to Calumet Farm. 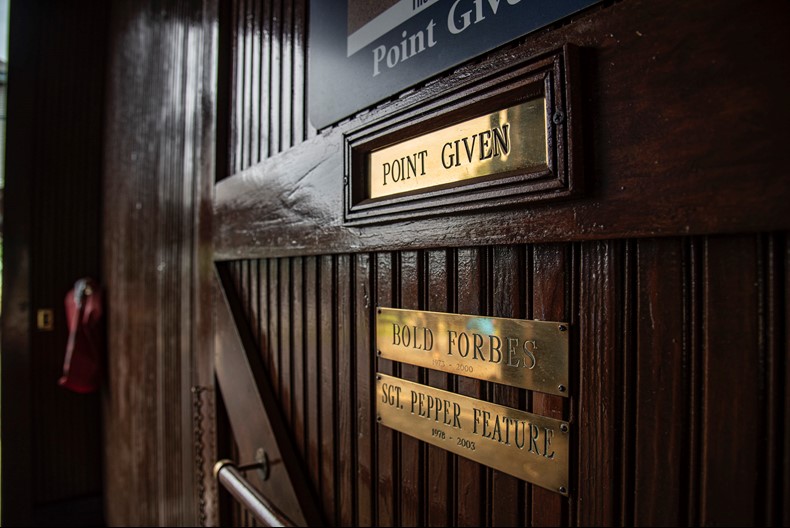