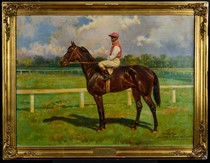 In April 2018, the International Museum of the Horse (IMH) opened a permanent exhibition, Black Horsemen of the Kentucky Turf, to celebrate the forgotten contributions of African Americans to the horse industry in Kentucky.

The African American contribution to the rise of Thoroughbred racing as the nation’s most popular sport of the 19th century, is undeniable. The fact that Isaac Murphy, a former slave, was the most celebrated sports hero of the late 19th century and the first jockey inducted into the National Museum of Racing’s Hall of Fame, attests to this. The story of the Black experience in the stables of the South and on the country’s tracks goes far beyond sport, offering a microcosm of the country itself and the difficult issues it faced. Human slavery, reconstruction and the repressive Jim Crow legislation still haunt this country today. This exhibit will tell the story of the African American experience in the stables and on the tracks here in Kentucky.

Great strides have been made to unmask this history in the last 25 years with well-researched publications by authors such as Pellom McDaniels, Katherine Mooney, Joe Drape, Ed Hotaling, Mary Jean Wall and others. Their works have sparked public interest and temporary exhibits across the country, celebrating the great Black jockeys and trainers of the past particularly. While this has been a great step forward – and the Black Horsemen exhibit will begin to pull the curtain back on a regional level – a need remains to examine the experiences of these men on a national scale and to celebrate the names and rich stories of those other forgotten Black horsemen who, with their unique skills, toiled in America’s stables and on its tracks. With each passing year, access to these stories is disappearing, and that is why the International Museum of the Horse is developing, to complement the Black Horsemen exhibit, a National Chronicle of African American Horsemen.

The National Chronicle will have three basic functions: to provide a reliable source of information for scholars and researchers; to deliver and solicit information regarding unknown Black horsemen; and to provide an enticing educational experience for its users.