CHAMPION STANDARDBRED STAYING TOGETHER DIES AT THE KENTUCKY HORSE PARK 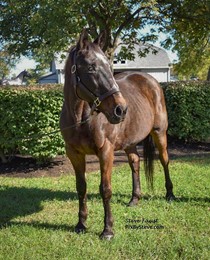 LEXINGTON, Ky. (October 29, 2019) — Champion Standardbred, Staying Together, died October 28, 2019, at the Kentucky Horse Park where he had been retired after a successful pacing career.  At the age of 30, the gelding was euthanized due to infirmities of old age. The champion known as “Stanley” came to the Kentucky Horse Park in September 1995.

Sired by Panorama, out of Happily Involved, Staying Together was foaled on April 16, 1989, by Kentuckiana Farms of Kentucky. Known as “Stanley,” Staying Together last raced in 1995 and completed his four-year career with 46 wins in 95 starts, earning $1,692,832.

When Staying Together retired from racing, he did so with remarkable credentials. He was voted harness racing’s “Horse of the Year,” as well as “Aged Pacing Horse of the Year” in 1993. That year will be remembered as one of the greatest seasons in harness racing, as Staying Together won five races in a row, defeating the best older pacers on the continent in the opening legs of the Graduate Series at the Meadowlands, Rosecroft and Freehold Raceways in New Jersey and Maryland.  In the entire 1993 season, Staying Together won 21 of 26 races, three of them in sub 1:50.  One of those wins, the June 19 leg of the Driscoll Series at the Meadowlands, was the fastest race mile in harness history, 148.2. In August 2002, he was inducted into the Canadian Racing Hall of Fame.

Staying Together shared the Kentucky Horse Park Hall of Champions with other champion horses including fellow Standardbred pacers, Western Dreamer and Won the West, Thoroughbreds Go for Gin, Funny Cide, Point Given and Da Hoss, American Quarter Horse Be A Bono.

Like the other great Hall of Champions horses that died in retirement at the park, Staying Together was buried in the Memorial Walk of Champions near Standardbreds Cam Fella and Rambling Willie.